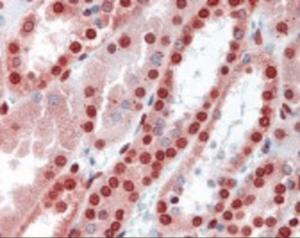 PRSI49-304EA 480 EUR
PRSI49-304
Anti-MBD3 Mouse Monoclonal Antibody
Antikörper
DNA methylation, or the addition of methyl groups to cytosine bases in the dinucleotide CpG, is imperative to proper development and regulates gene expression. The methylation pattern involves the enzymatic processes of methylation and demethylation. The demethylation enzyme was recently found to be a mammalian protein, which exhibits demethylase activity associated to a methyl-CpG-binding domain (MBD). The enzyme is able to revert methylated cytosine bases to cytosines within the particular dinucleotide sequence mdCpdG by catalyzing the cleaving of the methyl group as methanol. MeCP2 and MBD1 (PCM1) are first found to repress transcription by binding specifically to methylated DNA. MBD2 and MBD4 (also known as MED1) were later found to colocalize with foci of heavily methylated satellite DNA and believed to mediate the biological functions of the methylation signal. Surprisingly, MBD3 does not bind methylated DNA both in vivo and in vitro. MBD1, MBD2, MBD3, and MBD4 are found to be expressed in somatic tissues, but the expression of MBD1 and MBD2 is reduced or absent in embryonic stem cells, which are known to be deficient in MeCP1 activity. MBD4 have homology to bacterial base excision repair DNA N-glycosylases/lyases. In some microsatellite unstable tumors MBD4 is mutated at an exonic polynucleotide tract.

MBD3 antibody can be used in ELISA, Western Blot, and immunohistochemistry starting at 5 μg/mL.