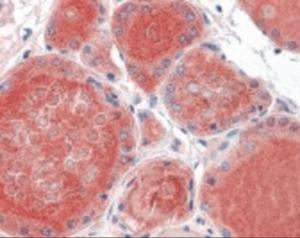 PRSI48-427EA 480 EUR
PRSI48-427
Anti-GNAS Rabbit Polyclonal Antibody
Antikörper
The GNAS1 gene encodes the alpha subunit of the G protein Gs, which couples receptor binding by several hormones to activation of adenylate cyclase (Hayward et al., 1998). This locus has a highly complex imprinted expression pattern. It gives rise to maternally, paternally, and biallelically expressed transcripts that are derived from four alternative promoters and 5' exons. Some transcripts contains a differentially methylated region (DMR) at their 5' exons, and this DMR is commonly found in imprinted genes and correlates with transcript expression. An antisense transcript exists, and this antisense transcript and one of the transcripts are paternally expressed, produce noncoding RNAs, and may regulate imprinting in this region. In addition, one of the transcripts contains a second overlapping ORF, which encodes a structurally unrelated protein - Alex. Alternative splicing of downstream exons is also observed, which results in different forms of the stimulatory G-protein alpha subunit, a key element of the classical signal transduction pathway linking receptor-ligand interactions with the activation of adenylyl cyclase and a variety of cellular reponses. Multiple transcript variants have been found for this gene, but the full-length nature and/or biological validity of some variants have not been determined. Mutations in this gene result in pseudohypoparathyroidism type 1a, pseudohypoparathyroidism type 1b, Albright hereditary osteodystrophy, pseudopseudohypoparathyroidism, McCune-Albright syndrome, progressive osseus heteroplasia, polyostotic fibrous dysplasia of bone, and some pituitary tumors.